As we approach the Holiday season, we feel it’s important to bring up an issue that the team here at Poplar Homes is very passionate about. As you drive around the streets of the San Francisco Bay Area, especially in downtown San Jose, it’s clear that there are many individuals within our community who are homeless. How did it become this way? Well, as every San Jose renter or homeowner knows, the rapid growth of the tech industry has caused the cost of living to rise significantly. This change has displaced thousands of people and hundreds of families from their homes.

Here at Poplar Homes, we feel that it’s important to do our part to combat this problem as we believe that everyone deserves somewhere safe and happy to call home. One of the first steps in addressing homelessness is to spread awareness of the issue and to educate our community on what they can do in order to make a positive impact. That being said, if you’re unfamiliar with how widespread homelessness in our community, here are some quick facts to give you a better understanding. 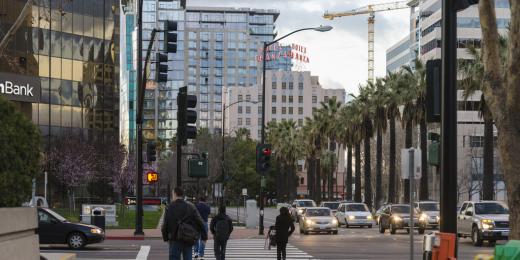 According to the most recent homelessness census conducted in San Jose at the beginning of 2015, there are roughly 4,063 homeless individuals living within the city limits. 69% of this population is living on the streets, in abandoned buildings, in encampment areas, and in cars. That means that there are over 2,800 people who have no safe place to call home (the other 31% live in shelters or assisted housing).

The census points out that the 2 most common obstacles preventing these people from being able to secure permanent housing is unaffordable rent, and the absence of steady employment and income. Once a person becomes homeless, it can become very difficult to overcome the circumstances and prevent it from happening again.

For this reason, “51% of those experiencing homelessness for the first time [have] been homeless for one year or more.” Furthermore, 68% of the current population reported that they have been homeless multiple times. Based on this data alone, there is not enough support for these people to help them escape the San Francisco homelessness crisis, and maintain a comfortable life off of the streets.

When confronted with the stats and figures, it is easy to become overwhelmed by the problem and to feel powerless to make a difference. If this happens, just remember that even if it doesn’t feel like much, one small act of kindness can be a great help.

Imagine if half of San Jose’s population took an hour out of their week to volunteer, or skipped their usual morning coffee to donate the money instead; what a difference that could make! Don’t let yourself get caught up in the enormity of the issue. It’s true, not one person or one organization can be the solution to ending homelessness.

However, if you can find a way of providing continual support to organizations that are work to improve the lives of homeless, whether that’s donating money or your time, you can be apart of the solution. The only way we’re going to bring an end to homelessness is if we address the problem together, as a community.

The city of San Jose has compiled a list of ways you can assist homeless persons in our community. Check out the full list here.

Nick Medal was a part of Poplar Homes (formerly Onerent)’ Marketing Team as a specialist in digital marketing and advertising. Nick has contributed several articles to the Poplar Homes blog from a millennial’s point of view on real estate.